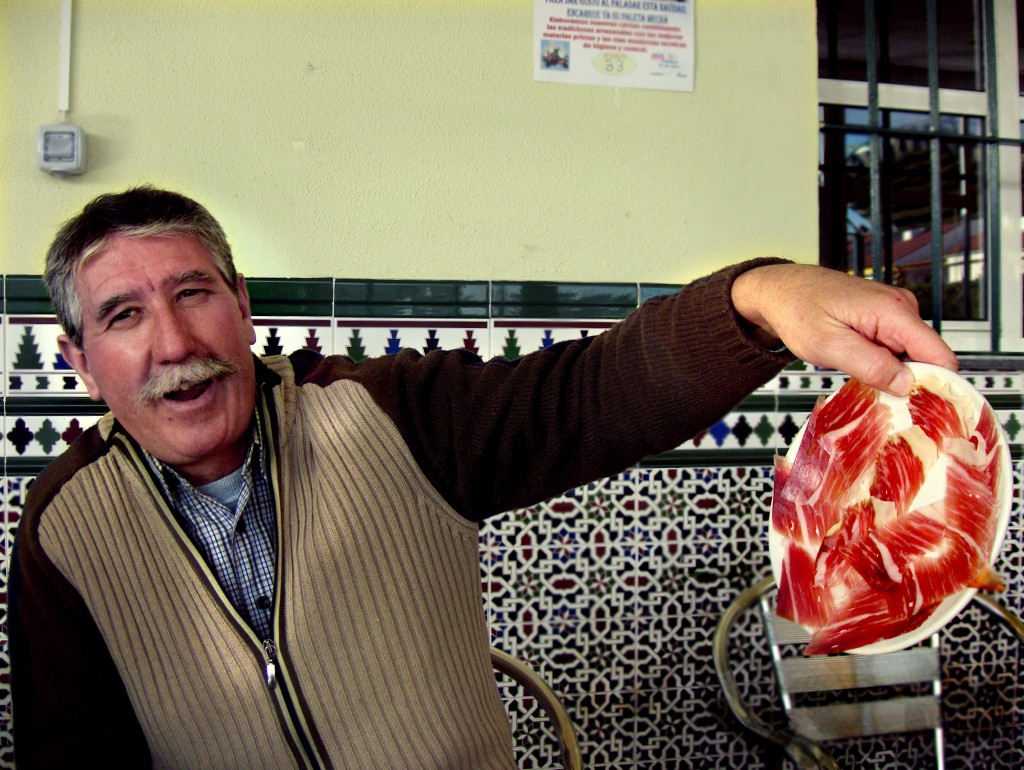 A Spaniard shows authentic "jamon," sliced thin and sticks to the plate!

In most college composition textbooks, there is an entire section devoted to the complexities of American "culture" and the sinister activities of the media, advertising, and popular movies and television. However, one could claim that these information outlets are not necessarily the best way to understand a culture. We spend more time in the kitchen than we do watching movies, and there are few things that impact us in the way that food does: from how we produce and consume food to who we eat with.

Adam Platt, in his essay, "Eating Myself Silly," claims that "For a whole new generation of travelers, food is a living, breathing piece of cultural anthropology, with its own language, its own history, and even its own ancient temples of worship. Whether you're visiting the food stalls of Togo or Bangkok or the grand restaurants of Paris or Rome, there's no quicker, more immediate way to commune with the essence of a culture, the new age 'gastronauts' will tell you, than by taking to the streets and eating yourself silly." The article on Food and Culture describes the role of food in a number of cultures.

There is a large and growing voice in American culture right now that begs for all of us to think more ethically and sustainably about the food we eat. Some have even gone so far as to call it a "Food Revolution." However, there are others who think that the concept of nostalgia has infected this movement towards better eating. For instance, Brent Cunningham, in "Pastoral Romance," says it is "bourgeois nostalgia" that is driving most of the conversation and that "the reality of America’s food past is far more complicated, and troubling, than is suggested by the romantic image at the heart of our foodie nostalgia."

Regardless of what is driving today's food-reform movement, most of us would agree that something needs to change the way most Americans eat.

"Food and Culture", an online article:

People also connect to their cultural or ethnic group through similar food patterns. Immigrants often use food as a means of retaining their cultural identity. People from different cultural backgrounds eat different foods. The ingredients, methods of preparation, preservation techniques, and types of food eaten at different meals vary among cultures. The areas in which families live– and where their ancestors originated–influence food likes and dislikes. These food preferences result in patterns of food choices within a cultural or regional group.

Food items themselves have meaning attached to them. In many Western countries a box of chocolates would be viewed as an appropriate gift. The recipient of the gift would react differently to a gift of cabbage or carrots than to chocolate. In other countries chocolates might be a less appropriate gift.

Nations or countries are frequently associated with certain foods. For example, many people associate Italy with pizza and pasta. Yet Italians eat many other foods, and types of pasta dishes vary throughout Italy. Methods of preparation and types of food vary by regions of a nation. Some families in the United States prefer to eat "meat and potatoes," but "meat and potatoes" are not eaten on a regular basis, nor even preferred, by many in the United States and would not be labeled a national cuisine. Grits, a coarsely ground corn that is boiled, is eaten by families in the southern United States. A package of grits is only available in the largest supermarkets in the upper Midwest and would have been difficult to find even in large Midwestern supermarkets twenty years ago.

Regional food habits do exist, but they also change over time. As people immigrate, food practices and preferences are imported and exported. Families move to other locations, bringing their food preferences with them. They may use their old recipes with new ingredients, or experiment with new recipes, incorporating ingredients to match their own tastes. In addition, food itself is imported from other countries. Approximately 80 percent of Samoa's food requirements are imported from the United States, New Zealand, or Australia (Shovic 1994). Because people and food are mobile, attempts to characterize a country or people by what they eat are often inaccurate or tend to lump people into stereotypical groups.

Nevertheless, what is considered edible or even a delicacy in some parts of the world might be considered inedible in other parts. Although food is often selected with some attention to physical need, the values or beliefs a society attaches to potential food items define what families within a cultural group will eat. For example, both plant and animal sources may contribute to meeting nutritional requirements for protein; soybeans, beef, horsemeat, and dog meat are all adequate protein sources. Yet, due to the symbolism attached to these protein sources, they are not equally available in all societies. Moreover, even when the foods perceived to be undesirable are available, they are not likely to be eaten by people who have a strong emotional reaction against the potential food item.Some food beliefs and practices are due to religious beliefs. Around the world, Muslims fast during Ramadan, believed to be the month during which the Qur'an, the Islamic holy book, was given from God to the Prophet Muhammad. During this month, Muslims fast during daylight hours, eating and drinking before dawn and after sunset. Orthodox Jews and some conservative Jews follow dietary laws, popularly referred to as a  kosher diet, discussed in Jewish scripture. The dietary laws, which describe the use and preparation of animal foods, are followed for purposes of spiritual health. Many followers of Buddhism, Hinduism, and Jainism are vegetarians, in part, because of a doctrine of noninjury or nonviolence. Abstinence from eating meat in these traditions stems from the desire to avoid harming other living creatures. Despite religious food prescriptions, dietary practices vary widely even among those who practice the same faith. Such variations may be due to branches or denominations of a religious group, national variations, and individuals' or families' own degree of orthodoxy or religious adherence.

In addition to impacting food choices, culture also plays a role in food-related etiquette. People in Western societies may refer to food-related etiquette as table manners, a phrase that illustrates the cultural expectation of eating food or meals at a table. Some people eat with forks and spoons; more people use fingers or chopsticks. However, utensil choice is much more complicated than choosing chopsticks, fingers, or flatware. Among some groups who primarily eat food with their fingers, diners use only the right hand to eat. Some people use only three fingers of the right hand. Among other groups, use of both hands is acceptable. In some countries, licking the fingers is polite; in others, licking the fingers is considered impolite (and done only when a person thinks no one else is watching). Rules regarding polite eating may increase in formal settings. At some formal dinners, a person might be expected to choose the "right" fork from among two or three choices to match the food being eaten at a certain point in the meal.

The amount people eat and leave uneaten also varies from group to group. Some people from Middle Eastern and Southeast Asian countries might leave a little bit of food on their plates in order to indicate that their hunger has been satisfied (Kittler 2001). Cooks from other locations might be offended if food is left on the plate, indicating that the guest may have disliked the food. Similarly, a clean plate might signify either satisfaction with the meal or desire for more food.

Food plays an important role in the lives of families in most cultures. However, the degree of importance varies from culture to culture. For example, in American Samoa most family activities and ceremonies center on eating. A host family demonstrates its prosperity or societal rank by providing large quantities of food (Shovic 1994). Among other families in other locations, activities and celebrations include food, but food is not necessarily the center of the event.

NOW: answer the question below. Remember that your response should be unique, well written, and approximately 2 paragraphs long. It should also clearly show that you have read the assigned essays by quoting or otherwise referring to them. Although you are not required to do so, reading and responding to other students' comments might help your grade in the long run! To see an example of excellent, thoughtful discussions about food, skim through this link: "Jamie Oliver Shows How Chicken Nuggets are Made" via Metafilter.   Some of the comments are very short, but pay attention to the longer ones, since those are the kinds of responses that will get the A!

Discussion Question: If food really is a reflection of culture, what does current food-reform say about the way American culture might be changing? Also, not all of America is the same; there are smaller sub cultures within the larger one. For instance, the way that Alaskans eat is different from the way Southerners eat. How do Alaskan ways of eating differ from others, and how do they reflect Alaskan culture?

This site uses Akismet to reduce spam. Learn how your comment data is processed.

Get Help With MLA